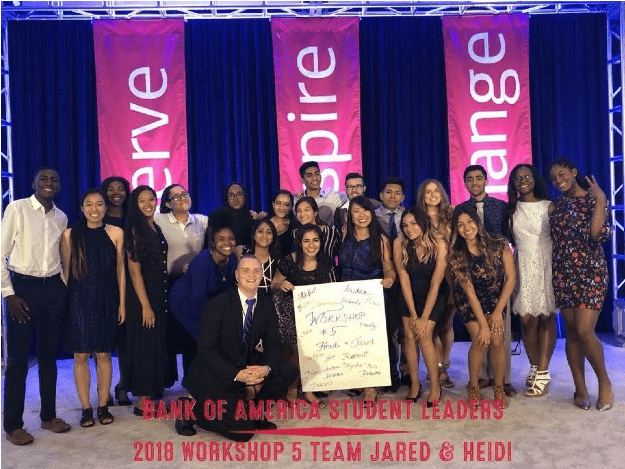 As Forrest Gump once said, “Life is like a box of chocolates. You never know what you’re going to get,” the 2018 Bank of America Student Leader Summit was something like that. From July 8 – July 13, about 230 other Student Leaders from all over the US assembled in Washington D.C. At this summit, we were exposed to speakers and workshops that focused on developing personal skills that would create a more civically engaged society.

The first day in D.C. was full of surprises and within a matter of minutes there seemed to be an effortless community between all of the Student Leaders, we were able to have insightful discussions while creating friendships that may last a lifetime. Every speaker, presentation, and activity that was planned for the week was purposeful. Some of the presentations that stood out to me in particular were Eva Vega-Olds and LIFTopolis.

Eva Vega-Olds is a social justice, diversity, and bias prevention trainer, educator, performer and keynote speaker who educated us about the connection between bias and hate with a responsive activity as well as with her own experiences. She made sure that everyone was engaged to what she was saying, her public speaking skills were beyond profound and to simply put it, she managed to make me laugh and cry within a minute of each other. Her presentation, being on the first day, managed to make all the Student Leaders feel close to each other as we became comfortable enough to share our intimate stories of bias or prejudice. At the end of her speech, I felt more inspired to change our societal constructs surrounding bias. The first day definitely ended with a bang as her presentation united all 231 Student Leaders, regardless of any differences. Like Vega-Olds, all the speakers exerted a high level of leadership and it is an inspiration for me because they actively use their public speaking skills to make a difference.

One particular activity that we participated in which I believe is making a difference is LIFTopolis. The LIFTopolis simulation provided everyone with a folder which contained background information about our character who was facing poverty. We were given four 12-minute intervals or days to gather everything we needed to be stable: healthcare, housing, childcare, food and water, transportation… all the basic necessities. When I first heard about this task, I thought it would be feasible, but yet again, I was wrong.

Each day (every 12 min interval) was a struggle because I had to attain all this documentation from rooms I was not aware of because the simulation had different rooms for the services such as DMV, food stamps, etc. I spent two days in line at the DMV and in the end did not receive everything I needed. By the end of the four days, and even before that, I was discouraged and had practically given up. The reality was that all those folders of characters were real people, and that these people go through so many hardships which we rarely acknowledge. Just doing the simulation made me frustrated, I can’t imagine being in such a situation, and if anything, this made me realize how privileged I am and that I need to use this privilege to help others who need it.

Along with these speakers, we were so lucky to meet our state senators on Capitol Hill Day, on a Wednesday, to be specific. Our day started with pictures, and we were fortunate enough to later meet with both Senator Thom Tillis and Senator Richard Burr.

We met Senator Thom Tillis at a Paws for Celebration event and to continue our conversation, he escorted us to the Senate gallery. As we walked there, I got the opportunity to ask him and later, Senator Richard Burr, some questions which were of importance to me surrounding The Affordable Care Act, his thoughts on the Supreme Court Nominee, Brett Kavanaugh, and the recent teacher rallies in Raleigh, NC.

Seeing our government and politicians in action was fascinating, leaving me with a new perspective because of my firsthand experience. I feel as if my concentration on politicians has risen since this trip; perhaps I have a better understanding of how every decision made impacts all of us, that it is up to us to change what we need to about our government rather than sitting idly by. 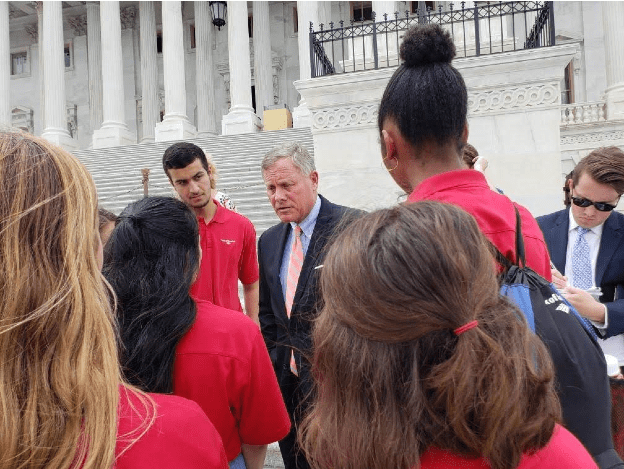 There were so many more fascinating, inspiring, and motivating speakers and activites and I could talk about this for hours long but the one thing that was the most amazing about this Bank of America Student Leader Program is the solidarity. I have never met a more unique, diverse, and energized group of people than these Student Leaders from all over the United States. Each person with a different story to tell, different experiences, and different viewpoints yet we all united for one mission which is to Serve. Inspire. Change.

After this summit, I am confident in our future and the impact our generation is going to have on society. Every Student Leader was supportive and starting from the first day, we created a safe place for each other to converse about anything, from our own experiences to political discourse. I am amazed at this group of people and cannot wait for the change we will bring.

I Survived That Workout?

Thanks for subscribing! Please check your email for further instructions.
Close Menu